The Significance of Skulls in Art Around the World

Symbols are one of the most powerful elements of the art industry, where a single object, however simple it’s represented, evokes a societal issue, an emotion, or an entire story.

Take the heart, for instance. It’s a simple shape, but it represents love, one of the most important and valued emotions and feelings in the world.

Over time, symbols become more and more abstract as they change and transform with the times, but their meanings remain etched in both history and our collective minds.

Whenever you see a heart, what do you immediately think of?

For most of the world, skulls are a depiction of death. They’re a stark reminder of our mortality, and one of the most powerful symbols on the planet.

However, though skulls might clearly have connotations of death, they also have hundreds of other meanings throughout the world and, more often, throughout the art world.

In some places, skulls represent transformation and change, whilst other times they can determine wealth, power, strength and protection.

As humans we readily assign meaning to objects to make our understanding of the world much smoother, and to create “shortcuts” in our brains to make sense of everything around us.

But sometimes, those associations just don’t match from one corner of the world to another.

And, in some cases, they don’t match from one person to another. As well as the universal meanings behind the most recognisable symbols, we create our own understanding of them through our personal experiences, learnings, and perspective.

This results in a whole host of representations of skulls (and other symbols) strewn throughout history, especially in the creative realm.

To Celebrate the Dead 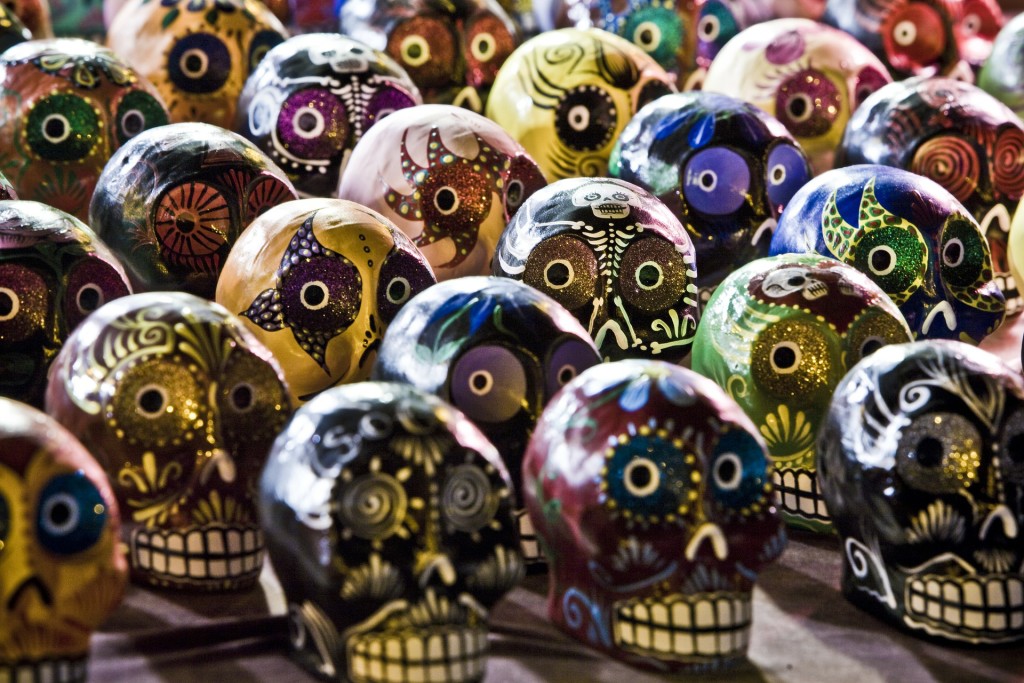 In Mexico, skulls are decorated in garish colours and patterns to commemorate the dead. The annual Dia de los Muertos (Day of the Dead) is a time for families to come together, dress up, party, and celebrate the lives of those they have lost.

The sugar skulls, as they’re known, are the symbols of this time of year.

During the festival, decorated skulls are placed around the gravestones of the deceased to create whimsical decorations that celebrate death instead of mourn lost relatives and friends.

They are known as sugar skulls because they were originally made from molded sugar and decorated with bright feathers, beads, and icing. Today, they are made from all sorts of materials, but they all remain similar in design, recognisable by the lashings of flowers, the bright colours, and the intricate detailing around the eyes and mouths.

At their very core, skulls are the simplest representation of the human, including all their features and flaws. In his 1892 illustration, Charles Allan Gilbert used the form of a skull to represent vanity. In the painting, a lady is shown sitting at a dressing table looking at herself in the mirror. The way the image is made up means the components come together to create the outline of a skull. 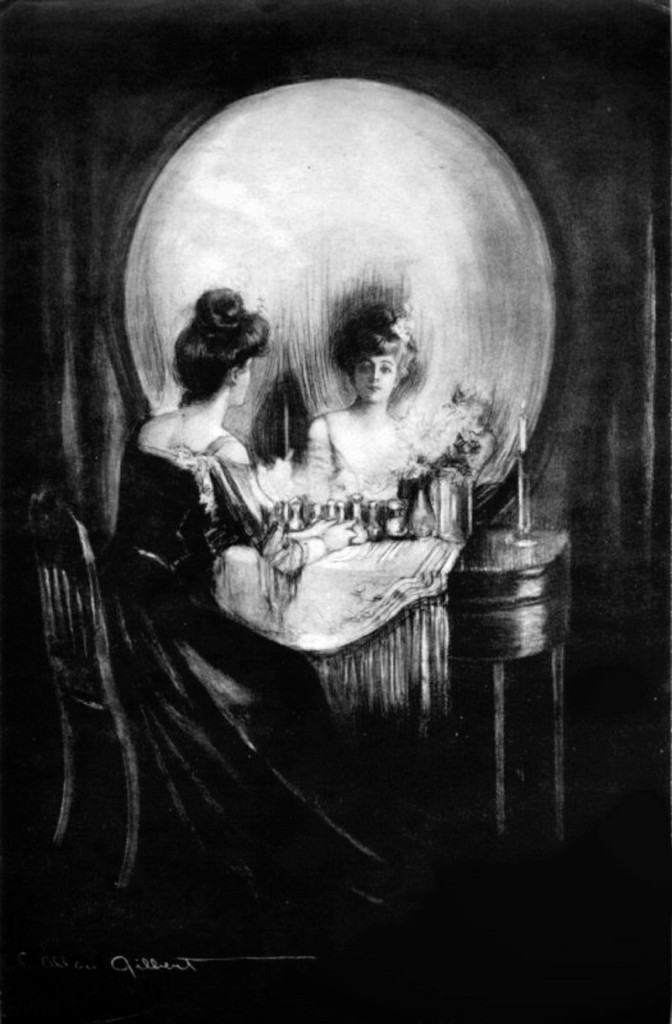 On first look, the illustration looks merely like the outline of skull. But look closer and you discover the scene that’s going on beneath the initial symbol of human life and death.

This clever depiction encourages viewers to look beneath the surface value of a piece (much like looking beneath the vain exterior of an individual), creating the idea that both the subject AND the viewer are practising vain ideals.

To Show Change and Transformation

For many cultures around the world, death isn’t the end of life.

In fact, it is merely the next step in the story, after which there are numerous other paths to take.

This is celebrated in Mexico, too, hence why Dia de los Muertos is a fun festival celebrating life and not mourning death like much of the Western world.

In this case, death marks a pinnacle turning point in the narrative of life, which is exactly what the skull represents in the death Tarot card.

Now, I’m not a massive believer in Tarot cards, but it’s interesting to see how the symbol of a skull is used in this respect – not just a piece of art, but also a traditional symbol that represents something not so “traditional”.

The symbolic meaning behind a skull has evolved over the years and recently it’s morphed into a “cool” emblem tattooed on forearms, splashed across t-shirts, and painted on to printed, decorative items.

In these instances, the image of the skull might well represent something different to the “wearer” and the viewer. And, for many, it’s simply a stylish decorative feature, much like a flower or a geometric pattern. 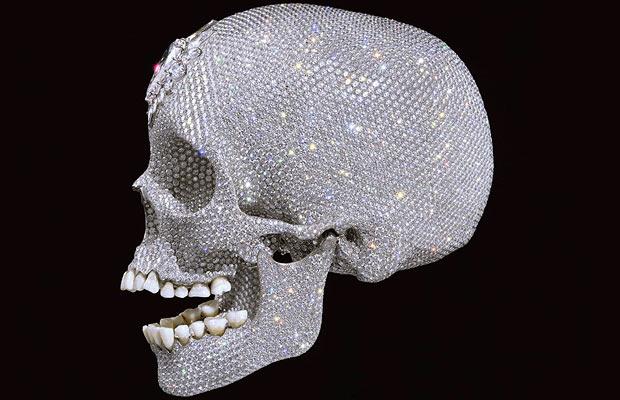 We only have to look at Damien Hirst’s diamante skull to see the rise in the skull as a fashion statement.

But it’s also been used as a medium on which to create other patterns, such as in the work of Sasha Vinogradova. She uses skulls as a canvas for showcasing Russian artistic styles – the skulls are kind of an afterthought, creating a macabre undertone to otherwise playful pieces.

Skulls still retain a huge symbolic status around the world, and I have no doubt we’ll continue to see their sunken forms appear in art of all different varieties.

That’s the beauty of the creative industry – the idea that familiar forms can be used to take on new, sometimes alien narratives depending on their societal backdrop and the personal experience of their creators. 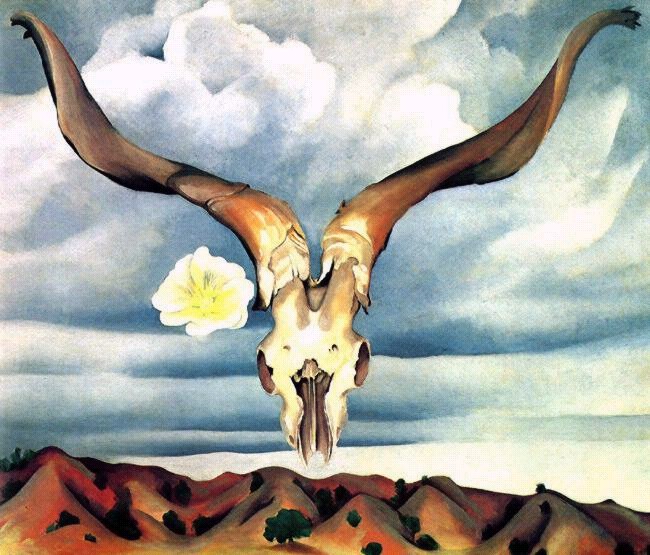 Take Georgia O’Keeffe as another example of an artist who’s stamped her own personal stories on a universal symbol. After she moved to New Mexico, O’Keeffe stumbled upon hundreds of cow and horse skulls in the desert.

Not wanting to leave them out in the stark landscape, she brought them home and began painting them, immortalising them in ways that would have been completely impossible in real life.

What do skulls mean to you and do you have a favourite piece of art work that includes the symbol of a skull?

Added to your cart: